it is 17 months since we moved to Kerala, months of constant discoveries of oneself, the family and our environment. nothing is like before. everything is changed.

rakhi passed by without a murmur in our town in Kerala. if not for the Facebook updates and pictures, i might have forgotten about it completely. we did not celebrate Rakhi. the power of the bond between siblings is as unassuming as it is strong. and, i found that bond grow around me when i hear my son and daughter actually conversing with each other, running with our dog, the teasing banter and the fact that they started sleeping by themselves in their own room - they have each other. 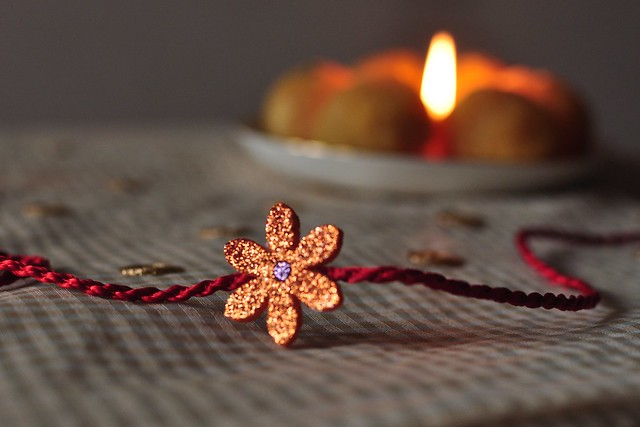 around this time, we took a long drive in the monsoons to our estates at the foot of the mountains. some pictures from then. 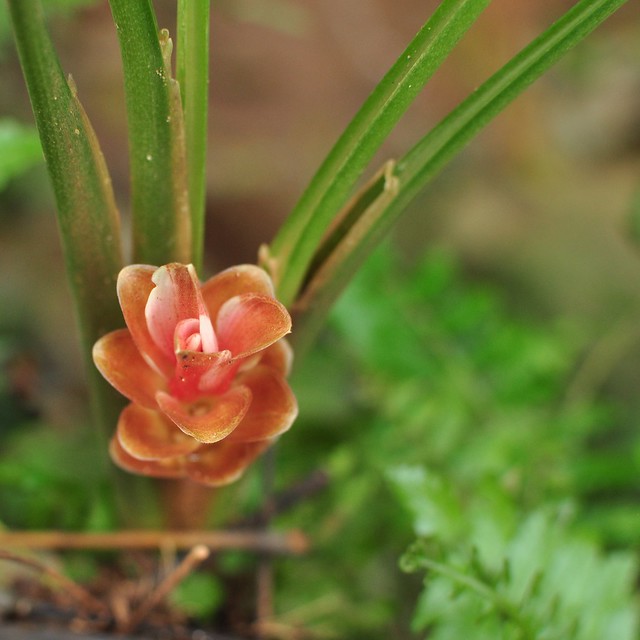 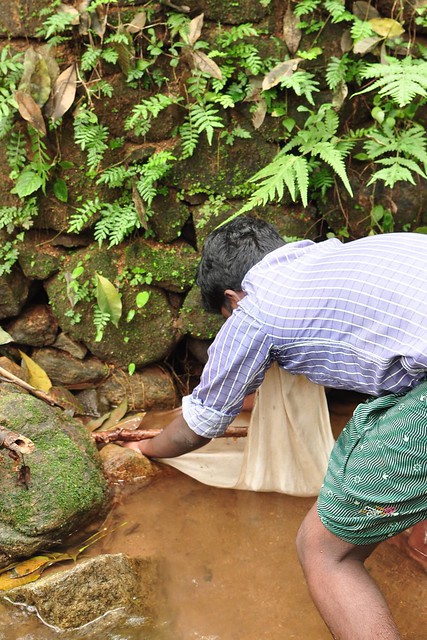 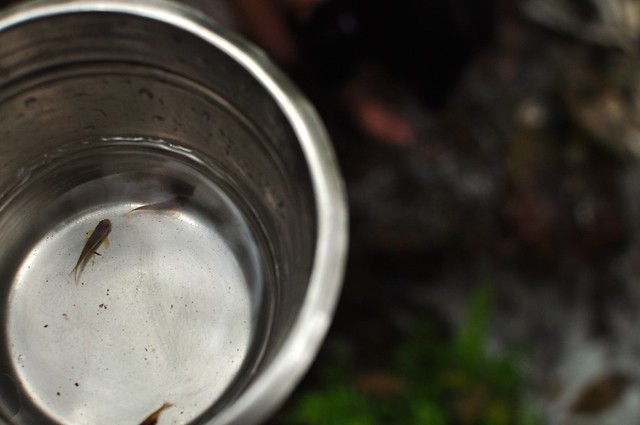 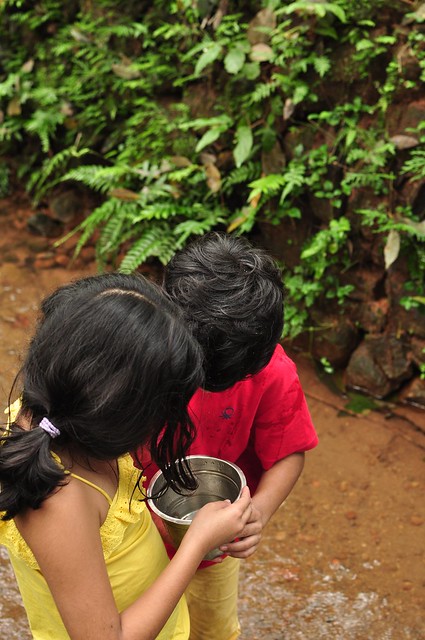 ps
how fast they grow!

it is true. an attitude of gratitude makes just-enough a feast! in the depth of the lowest of days, there always is a reason to be grateful for. and, more enough than not, I find these moments closely related to my family, my kids especially, and my friends!

my friends are my guardian angels. and, my daughter and son are little cherubs that can make me forget my splitting headache with their soft kisses and chubby arms around me. they are always so warm and smell so snugly that I just want them to hug me forever! 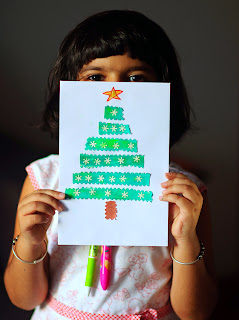 chubby dimpled hands have always fascinated me. and, it's always Ashu, Ashvita, who comes to my mind when i talk of little hands that can be eaten. *cruella laugh* i can safely say i have seen her grow from a baby with a curly mop of hair to this poised and calm five year old, through her pictures. 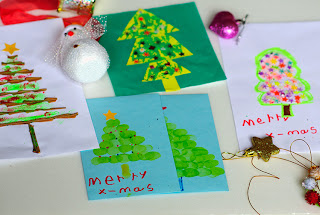 her mother, also Shilpa, and i met on flickr and have been friends for over four years. we met once, last year when they had come down to India for diwali. it is, and will be one of my most happy memories for years to come. i can also safely say this, we are more than friends. and, the only part not making us sisters is the name. what parents will give the same name to both their daughters! 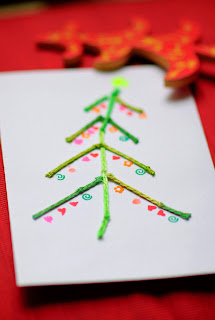 with ribbons stuck and baubles drawn.

when i saw this little bundle of creativity in action, it was more than an inspiration. and, i am overwhelmed and grateful that her mother agreed and spent quite some time photographing, for 'the kitchen window.' all pictures in this post are by Shilpa, and all ideas were executed by five-year-old Ashu. 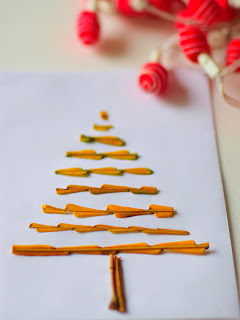 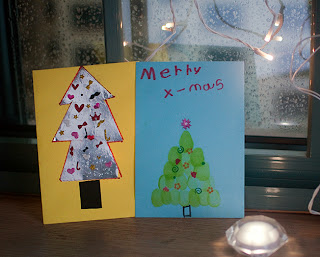 no limits to her creativity.
moustache stickers!

here's presenting diy greeting cards that little children can make. can you imagine the happiness such a card would bring grandparents and uncles and aunts and/or parents who cannot make it to the big day. it would feel like the child sent a part of themselves in the mail. 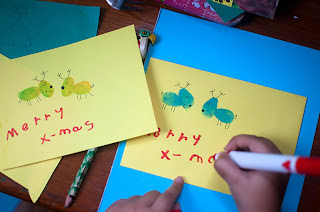 thumbprint reindeers!
what did i tell you about edible, sweet hands :) 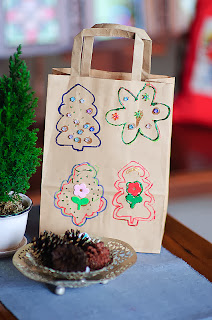 and, her personalised goodie bag to carry all the cards she made. 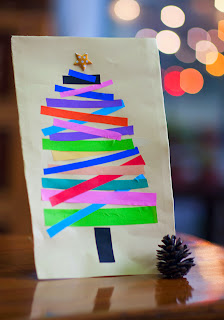 this is where Shilpa records her exotic travels and her colourful everyday life. thank you Ashu, you are a rockstar. thank you Shilpa, much love.


PS
aren't you guys glad that there is something on the blog, other than me :D

'tis the season to be jolly

i was in the first year of my pre-degree course when my mother's mother, ammachi, had her first cardiac arrest. all phone calls were dotted with the words "heart attack." despite being discharged in a week, she went about her daily routines, always fretting over her husband, his meals, his clothes, his coming, his going. in less than a month she had another near-fatal cardiac arrest.

the bypass surgery was serious, and hardly heard of in Kerala, more than 15 years ago. it was in a hospital not far from our home, but in the neighbouring state. i didn't see mom for weeks. we had a domestic help brought in immediately from a relative's house who managed the kitchen and housework. i learnt to operate the washing machine.

ammachi stayed on with us for another couple of months. i learnt and met about most relatives on my mother's side in those two months. mom's cousin had started a business in hand loom saris. she came with five saris. mom could not will herself to buy it. but ammachi, she bought one with a border of deep maroon and golden stripes. this was my introduction to how women held onto hope in unravelling circumstances!

it is December. when the lagging year suddenly picks up tempo. a new year is not that far away and its like there is a new lease to life. hope surges. and, i bring you another little diy, a zesty and spicy pomander to match the upbeat mood. once you perforate the sweet limes with toothpicks, to pierce the cloves into it is simply easy-peasy. even the kids can do it. place it in with chocolates in an antique chest to set the mood for long conversations with friends. or hang it on door knobs to add interest and let the holiday waft in every room! Labels: "thinking out loud", colour lifestyle aesthetics designing decor, I love my life, something creative over the weekend, winter

there is a change in the air.
a nip in the mornings and fog clouding the tall trees.
the leaves are falling.
the birdcalls in the early morning sound different.
even in the little tropical haven in Kerala, i now live in, there is an unmistakable change in the air.
enough to shake me out of hibernation. its has been a long monsoons this time.
one that drenched Onam, Kerala's harvest festival,
which is meant to be bright and sun-shiny
and cheered with flowers.
the rains have continued with almost no break
into the thunderstorms characteristic of the Malayali month of thulaam. my camera sank in the depths of the damp,
as did one of my most prized lenses.
they are both resting in the sick shelf of my room,
along with my Macbook - my window to the world.
but, the bursts of sunshine
has inspired us enough to put our sparkle on.
and, shimmer in the sunlight.
literally. the rains continue,
sometimes not stopping for hours.
despite the cloudy gloom
and the sodden grounds,
the feeling that better things are yet to come
manages to reign strong. Christmas is not far away.
things will look up.

ps
i do love leaves!

it really is not possible to cut into a mango without being usurped by memories. a carton of them, hand-picked from the hundreds plucked, had been put in the kitchen by my brother, early in the afternoon. as i bustled in to make tea for the family, that sweet smell of more than a fifty mangoes, some ripening - others just right - hit me strongly. i was reduced to the ten-year-old trying to pluck low lying mangoes  on my grandfather's farm.

less than ten years later, i found myself sitting at the mica-topped dining table in our ancestral house drinking tea with grandpa, whom everyone calls pappa, and my dad's eldest brother. as with most houses in Kerala surrounded by tall trees, the afternoon is ringing with birdsongs and squirrels chirping as the walls come alive with flitting light through the leaves. the first big exams of my first semester in law college had got over before the holidays. i was sure i would flunk at least three subjects. i was scared to go back, wondering if opting for legal studies had been the right option. and, teenager that i was, i kept ranting to my uncle, whose most favourite niece i am, by the way. he listened patiently, not making the mistake of uttering a word lest i have a meltdown.

that is when my grandpa said softly, in his strong professor voice, "courage does not mean you stop. courage means you go on, despite whatever makes you afraid!" he went back to sipping his tea, made just the way he likes it. the birds kept calling, the sunlight kept dancing on the walls.

but, in those two seconds, i knew my life had changed forever.

it does not mean that i haven't cowered or made for the nearest escape route when i could. but, whenever i have been cornered, when the only way out has been the hardest way, these words have lent me dignity to find value in my life in the lowest of times and held me in good stead in times of joy.

ps
this post has been sitting on my mind and my drafts folder since summer. but, this is when i could will myself to post it.

'the reluctant homemaker' has shifted base to Kerala, a rather lush and wet state in southernmost India. i felt the need for a new name. 'the kitchen window' was the name of my blog when i freelanced for the Times Of India web portal, iDiva. since Kerala is the home of my ancestors, where my roots are, i thought, why not etch my first blog's name into history as well.

spur of the moment.

impulsive acts.
the shocking start
that makes you jump out of your skin,
is best to cure hiccups.

or, this morning,
it helped me put behind
the absent domestic help,
the very lived in living room.

an impromptu DIY ~
two used mint packs.
sparkly scotch tape.
and, you have a little box
to stow your change,
or, carry a change of earrings
for weekend trip. it is sunny and cool at the same time here.
light and shadow together.
sorrow, never far from joy,
laughter with tears.
night and day.
but, it is innate in the universe,
it is the rule of life.
for every yes,  your stand you take,
you leave in darkness other options.
the shadows swallow the NOs. its hectic.
slowly starting to gather,
organize the stuff
i have been picking up
from places, for months,
to put under the tree...
...where we will all gather,
on Christmas morning.

married for almost nine years now,
i kind of know
exactly how each one of us will look
that morning.

acceptance. kindness. tolerance.
bound by love.
and, you have a family :)